My son is entering the trying times of the early teen years. There is little we connect on these past few months and a great deal on which we butt heads. It is all age appropriate and truly nothing detrimental to him or our household, but it is devastating to have my loving wee BoyChild suddenly embarrassed or annoyed by every little thing his family does. If he reads this post he will likely sigh jaggedly and roll his eyes dangerously far back into his head.

One of our battles is concerning school. He’s a bright kid, able to teach me math concepts and detail events in history by date and key characters. But he has this silly problem with being unable to remove his homework from his backpack and turning it into his teachers. Much to his irritation, when the middle-school-powers-that-be discovered his poor grades, they decided BoyChild should attend summer school. Now, I knew his grades were not reflective of his work. His teachers had even assured me that once he turned in his late assignments his grades would be altered and accurate. But I was resolved to no longer hound him on his responsibilities as this was the third and final term of his 6th grade year. By then he should know and follow through with what is expected of him and millions of other 12-year-olds nation wide. When summer school determinations were made he showed failing marks. When his work was turned in and the grading period was closed he had A’s and B’s. The horribly evil and tortuous mother that I am, I decided he could use a good lesson in consequences and refused to sign off on him being excused from summer school.

[Side note connection for the previous paragraph and the following: When beginning an new section on World War II for Social Studies, the teacher asked the class to fill in a questionnaire to find out how much they already knew on the subject. They were able to reference a text book, which the teacher knew would also produce results of copying versus real knowledge. BoyChild did not need to reference his book, correctly answered every question, and was finished before any of his peers. One would think he aced the assignment, however he was docked points… for failing to write his name at the top of the paper. Again, unable to follow through. Also, the story gave us a big giggle at the dinner table.]

BoyChild is hyper-fascinated/focused on history, specifically military history. This is an area where we have some common ground. When I was his age I was similarly focused and my love for history has grown as I have. (Which means it is now HUGE.) I was brainstorming ways in which to engage BoyChild in a not-so-obvious-mama way and thought of books I was reading around 6th and 7th grade. Being I was rarely into the “girly” side of teen literature, I knew this was going to be an easy-peasy.

Unconnected to any planning of sharing books with my son, but coincidentally timely and kind of eerie, I had the opportunity to wander through my old junior high a few weeks ago. I was sad to find the little corner where I would wedge myself 20-some-odd years past, among the military history books of Vietnam and the American Revolutionary War, no longer existed. The library was completely remapped and revamped. But one book in particular, complete with the image of its cover, stood out in my memory. I made a mental note to find this book at our local library and share it with my son.

Like most mental notes, it was filed deep within the grey matter and only surfaced again last week. I quickly utilized the Sticky Notes application on my  “smrt” mobile communication device and typed in the book title before the thought once again disappeared into my brain’s short term memory waste basket. This was on a Sunday.

The following Monday I asked my son what he had chosen from the summer school library. While he was digging through his backpack to retrieve what he had checked out, I explained the book I wanted to show him on our next trip to the public library. Hoping he would get excited about the story and we would have something to discuss together, I wildly described the key scenes and the impact the book had on me “way back when”. 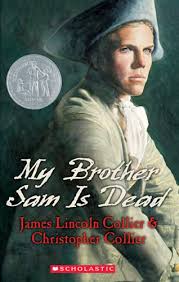 4 thoughts on “Books and BoyChild”